was
founded in Birmingham, England in 1892.
Beginning with the first production of bicycles, PHILLIPS has designed and manufactured military vehicles for Allied Special Forces during World
War I, forming the deep foundations of a long traditional brand. 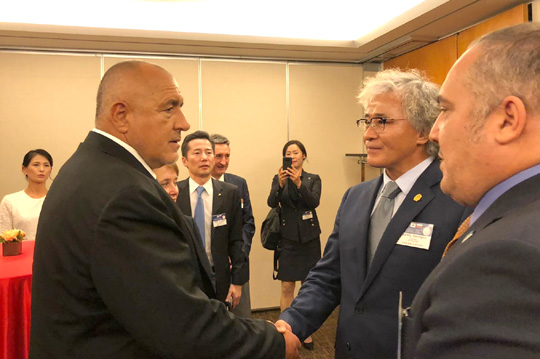 Developed as an opportunity to further deepen the future-oriented partnership on the occasion of the 30th anniversary of diplomatic ties.

Boyko Borisov is Moon Jae-in, the Republic of Bulgaria (boyko borissov) Prime Minister of the president to 1:40 p.m. June 26, at the invitation of the Namdaemun station with Lee Nak-yeon from the prime minister and the government.Afternoon by the Federation of Korean Industries, Seoul's Lotte Hotel, hosted by five major business groups attended the dinner meeting with leaders of South Korea and met with business leaders.On the same day, about 50 heads and businessmen of Korean economic organizations, including the Federation of Korean Industries (Chairman Huh Chang-soo), the head of economic organizations, and Philips Group (Chairman Bang Seung-ho), as well as 50 business representatives from the Bulgarian prime minister and the Bulgarian prime minister held exchanges to explore ways to cooperate.Philips Group attended morning talks and afternoon dinners, during which it had time with Prime Minister Voyko Borisov and Bulgarian economic officials to confirm their trust in mutual support, including electric vehicle and battery facilities and distribution facilities.Philips Group had an economic cooperation meeting with Bulgarian Economy Minister Emil Kranitolov on May 9 at the Imperial Palace Hotel Megriz Hall in Eonju, Gangnam-gu. Thorpe yesterday morning, Prime Minister of barley at Cheong Wa Dae Moon Jae-in, president and summits and to discuss strengthening cooperation between the two countries.While serving as prime minister three times at the talks, Moon will evaluate the leadership of Borisov, who is leading Bulgaria's internal and external development, and discuss ways to promote reciprocal and future-oriented practical cooperation in various fields, including trade investment, energy infrastructure, defense, defense, defense, culture and education.It also plans to reaffirm Bulgaria's support for the peace process on the Korean Peninsula and discuss major international issues.The visit to South Korea by Borisov, which comes ahead of the 30th anniversary of the establishment of diplomatic ties next year, is expected to serve as an opportunity to further strengthen the bilateral relationship that has continued to develop since the establishment of diplomatic ties in 1990, while further deepening the comprehensive future-oriented partnership between the two countries through expanded practical cooperation, an official at the presidential office Cheong Wa Dae said on Wednesday.