was
founded in Birmingham, England in 1892.
Beginning with the first production of bicycles, PHILLIPS has designed and manufactured military vehicles for Allied Special Forces during World
War I, forming the deep foundations of a long traditional brand.

Philips Group has signed a license for the PHILLIPS brand...World's le… 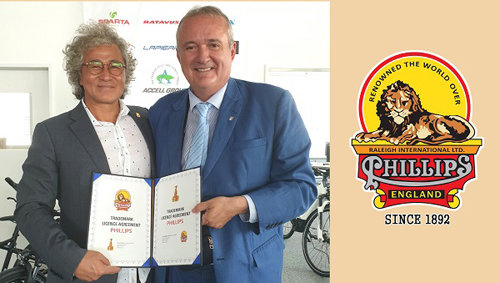 Philips Group Chairman Bang Seung-ho (left) has signed a final contract with Moreno Fioranbandi, CEO of Swiss Bike under Axel Group of the Netherlands,
in August in Juke, Switzerland. On the right is Philips emblem, which was born in 1892 in Birmingham, England.

Philips Group (Chairman Bang Seung-ho) announced on Tuesday that it has signed a final contract with Swiss Bike, a global brand-owned company that owns the 126-year-old orthodox brand "Philips."Philips Group previously signed an exclusive franchise contract for its brand in March, starting with South Korea and other Southeast Asian regions such as Japan, the Philippines, Vietnam and Cambodia, and wrapped up a final contract on global copyrights except China and India last month.With the exclusive rights to the Philips brand, the entry of locally produced electric vehicles, electric motorcycles and electric bicycles into overseas markets has gained further momentum, said Kim Yong-gil, CEO of Philips Electric Motor Co., adding that the company will lead a green lifestyle that improves the quality of life while providing safer and smarter high-quality services to customers worldwide who choose our products.The Philips brand was born in 1892 in Birmingham, England. Starting with mass production of bicycles, it produced military vehicles and tanks for the Allied Special Forces during World War I. Later, when Korean entrepreneur Bang Seung-ho acquired a license for the British Philips brand, he set up Philips Electric Motor, Philips Energy, Philips Construction and Philips Retail.Philips Electric Motor is currently expanding its growth horizons to Asia and Europe, taking over the spirit of the old and authentic big brand "Philips" and entering the Philippines' Jeepney replacement business.The company is introducing products and services that incorporate Philips brands across various industrial sectors, and is in talks with local governments to boost small and medium-sized enterprises and create more jobs, Kim said, adding that the company will be exporting various EV vehicles under its own development under a business agreement with Philippine and Cambodian government agencies in particular.